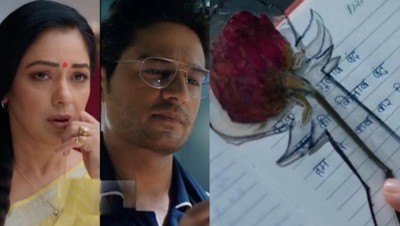 It was earlier seen that Anuj (Gaurav Khanna) meets Anupama (Rupali Ganguly) when he fails to take eyes off her.

Anupama is unaware of Anuj and his feeling for her.

On the other side Devika is much aware and is shocked to know that Anuj still loves Anupama although the love is one sided one.

Anuj has no expectations from Anupama and he continues to love her till date.

Anuj and his love feeling written in his personal diary

During the college days Anuj tried his level best to confess his love but it turned out to be his hard luck as his love confession remained incomplete.

Post returning home from party both Anuj and Anupama recall something.

Anuj see his love letter with the rose kept for Anupama and on the other hand Anupama dances back home Ankhiyon Se Goli Mare as she enjoyed the party a lot.

Let's see what future holds for both Anuj and Anupama.