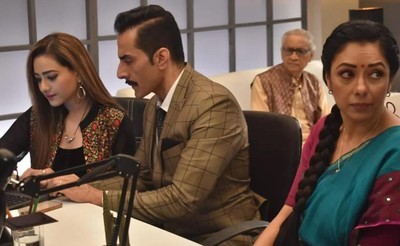 Star Plus's popular show Anupama is about to showcase some interesting twists in the life of Anuj and Anupama.

Vanraj is jealous of Anuj and Anupama's friendship and he starts feeling insecure about himself.

On the other hand, Anupama has started living her life independently choosing self-respect over anything.

Besides, Anupama does not care what Vanraj thinks about her and Anuj as she does not have anything for Anuj in her heart.

In the upcoming episode, Anupama gives a simple presentation to Anuj and he appreciates her idea but says that Vanraj and Kavya's idea is more practical.

Kavya insults Anupama about the presentation and says that her idea is not worth it.

In the coming episode, Anupama will serve dinner to Anuj at Vanraj's cafe which will irk Vanraj.

Meanwhile, Rakhi will taunt Vanraj that all these used to happen for him earlier.

Anupama: Vanraj learns about Anuj's love for Anupama past 26 years

Anupama: Vanraj learns about Anuj's love for Anupama past 26...