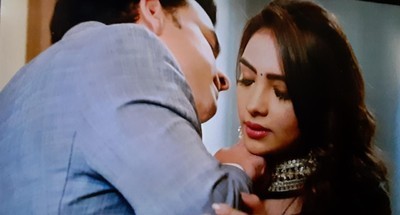 Zee TV's popular show Kumkum Bhagya is up with major drama and action.

It is seen that Rhea fails in hurting Prachi and hence plots a new plan.

Rhea pretends to fall on the oil that Prachi had cleaned blaming Prachi to have left oil intentionally to hurt her.

Further, Rhea creates a huge drama in front of Pallavi accusing Prachi of doubting her relation with Ranbir.

Moreover, Rhea sheds tears and gains sympathy from Pallavi as being the victim of Prachi's suspicion.

Shockingly, this infuriates Dida and she reveals Rhea's intentions of snatching Ranbir from Prachi.

On the other hand, Alia is conspiring something big to trap Pragya in a fake business deal with Gaurav Thapar.

Alia's motive is to make Pragya bankrupt and thus she is making a secret plan to hit Pragya financially.

However, Pragya and Sushma are getting trapped in the deal unaware of this scandal.

Now let us wait and watch what will happen further on the show.

Kumkum Bhagya: Rhea fumes as she misses trip with Ranbir

Kumkum Bhgya: Dida warns Rhea to stay away from Prachi(Mugdh...