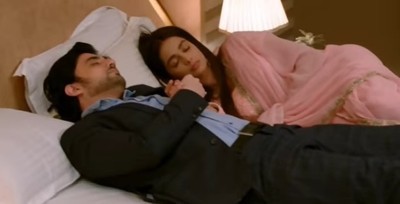 Zee TV's popular show Kumkum Bhagya is up with a high voltage drama and twist.

After many attempts,  finally Rhea manages to instigate Ranbir against Prachi.

Alia tricks Sid and Prachi and brings him to a hotel room on the pretext of meeting Pragya and Abhi's attackers.

However, she executes her evil plan and makes Prachi and Sid unconscious.

Moreover, she makes them sleep together holding hands close to each other.

Meanwhile, Rhea instigates Ranbir with pictures of Prachi and Sid thus bringing him to the hotel.

Ranbir goes mad seeing Prachi and Sid together in bed and screams waking them up.

However, to Rhea's shock, Ranbir's trust in his brother and wife is not shaken a bit.

Ranbir believes their story that they had been tricked and locked in the room by Alia.

Rhea tries to confront them but Ranbir shuts her up.

Now let us see what will be Rhea's next step to split Prachi and Ranbir.

Stay tuned to get further updates on the show.