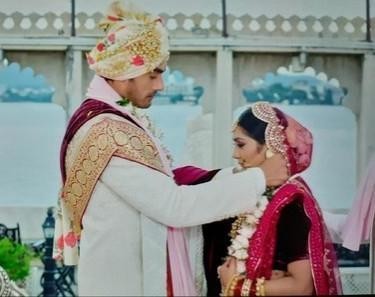 The story started with clumsy and simple Krisha being fired from her job by Prince Devraj.

This leaves her angry and worried as she is the sole earner of the family.

However, Prince Devraj soon realizes Krisha's worth as he gets saved from a deadly gunshot because of her garland.

This instigates him to take a life-changing decision and he reaches Krisha's house with a shocking proposal.

Devraj leaves Krisha and her family dumbfounded as he proposes to marry Krisha.

Krisha shocked seeing Devraj in a pool of blood

Further, the thought of marrying a prince seems like a fairy tale for Krisha.

However, soon there is a twist in the tale as Devraj is hit by a bullet and falls down in a pool of blood.

Will Krisha be able to save Devraj and fulfill her dream of marrying him?

What is the truth behind the shocking marriage proposal?

To uncover the deadly truth, stay tuned to serialgossip.com.