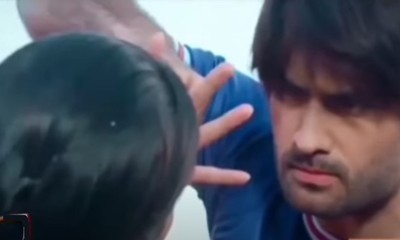 Colors tv latest show Sirf Tum is up for some high voltage drama in the upcoming track of the show.

It was earlier seen that Ranveer runs behind Riya's friend who wanted to kiss Ranveer.

Ranveer confronts the girl in front of everyone and asks her to kiss him.

The girl runs away and he runs behind her and he collides with Suhani on his way.

Ranveer holds Suhani's hand while her admission form gets torn and she starts crying.

Ranveer finds her crying and she reveals that she will not get another form as the admission counter is closed.

Ranveer enters the door and brings two forms for Suhani and gives hands it to her.

Suhani's father also reaches there to meet Ranveer's father to hand the file to him.

Later, Ranveer gets into a fight with the opposite team captain when Suhani reaches there.

Suhani falls over the guy and Ranveer is about to hit her but he stops looking at her.

Suhani runs from the place while Ranveer could not take his eyes off her.

Is Ranveer in love?