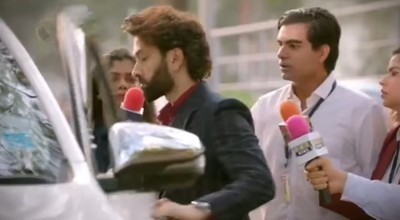 Sony TV's most popular show Bade Achhe Lagte Hai2 is gearing up for a shocking twist and drama.

As known Ram and Priya's marriage is only a deal and not a love relation.

However, this big secret is leaked out and the media makes an issue out of it.

The media questions Ram about his cheap mentality for making a contract marriage in spite of being such a rich man.

Ram's respect and reputation are at stake as he is targeted for making marriage a deal like a business.

Priya is shocked to see Ram being questioned by media about his relation with her.

Moreover, Ram wishes Priya supported him at this hour.

To his surprise, Priya stands besides him and attends the media coverage.

However, it is not so easy as the media questions Ram and Priya on personal grounds that will leave them speechless.

Their relation will be insulted by the media for being an emotionless deal.

Let us wait and see how will this incident change Ram and Priya's relation.

Stay tuned for more exciting updates coming up on the show.