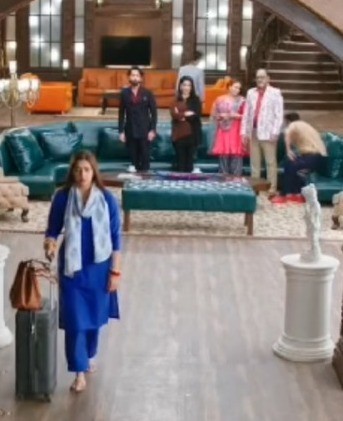 Sony TV's most liked show Bade Achhe Lagte Hai2 is up with an interesting twist and drama.

Priya had promised that she would leave Ram's house after Karvachauth and she keeps her promise.

The next morning, she packs her bag and leaves bidding bye to everyone.

Ram offers to drop her but she prefers to go by auto.

They recall their good moments of togetherness and weep.

Ram is in tears imagining his life without Priya while she is blank about her future.

Ram tries to delay Priya's exit by reasoning that the new annulment papers have not yet been made.

However, Priya thinks it has to one day or the other so it should not be dragged more.

Meanwhile, Priya is worried about how will she break the news to her mother.

While Ram and Priya are pained and shattered, Nandini rejoices in her victory.

She plays a good soul by being polite and caring to Priya.

Now it will be highly interesting to see how will the story shape up further.