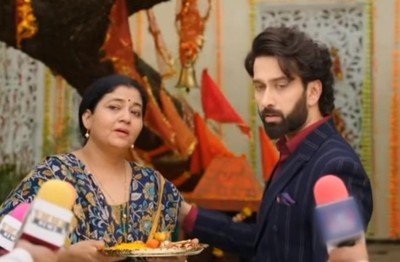 Sony TV's most liked and popular show Bade Achhe Lagte Hai2(BALH2) is up with an interesting twist.

Now that Ram and Priya's contract marriage is the hot topic for the media, they question Priya's family about it.

Priya is worried as the media surrounds her mother and reveals the shocking news of Ram and Priya's breakup.

Further, they question her about the annulment papers leaving her shocked.

In the meantime, Ram reaches there and shield Meera from the media's bombarding.

Moreover, Ram assures Meera that he will never leave Priya and she should not trust the media.

Ram takes Meera away from the chaos while Priya watches him on screen.

However, this doesn't go well with Nandini and she questions Ram about lying to Meera.

Nandini reminds Ram of separation and he should let Meera know the truth.

Shockingly, Ram decides to put the separation on hold till the matters settle down.

This leaves Nandini worried as she feels Ram might change his decision of divorce.