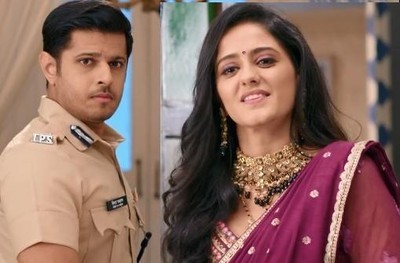 Star Plus popular serial Ghum Hai Kisi Ke Pyaar Mein is shaping up for a new turn in Virat and Sayi's life.

It was earlier seen that Bhavani always made the demand of heir from Virat and Sayi where Sayi was always against the same.

However Sayi learns from DGP that Virat loves Sayi a lot.

Sayi learns the real care and affection from Virat's side for Sayi where she learns that Virat loves her like his wife and not just friend.

Hence Sayi is much overwhelmed and wants to ask him to he loves her.

Sayi gets a major blow on learning about Virat's sudden leave

However Sayi gets a major blow when she learns that Virat has to leave her and go for a deadly mission.

Sayi feels broken down but she controls her emotions and wants to consummate marriage on Virat's return.

It would be highly interesting to see if Sayi's this desire gets fulfilled.

GHKKPM: Virat and Sayi’s new challenge to spice up Diwali

GHKKPM: Real Story of Virat-Sada’s past puts Sayi in danger