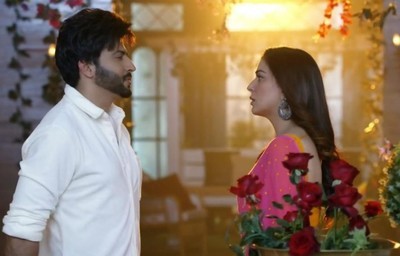 Zee tv's popular show Kundali Bhagya is about to showcase some interesting twists and turns.

Preeta warns Karan saying that she has not returned as his wife but as the owner of the house.

Karan tells he does not believe her and she can never be the house owner.

On the other side, Prithvi and Sherlyn increase the drug dose of Mahesh to make him mentally unstable.

Kareen feels that Karan will handle Preeta and show her the right place.

Meanwhile, Karan and Preeta meet in a filmy moment where he tells Preeta that he will fight her even if she gives him a rose.

Preeta tells that she did not get the rose for him and she sees love in his eyes.

Karan asks Preeta to look at him and they share an eye lock.

Karan and Preeta get emotional while he hugs her with love and his anger melts down.