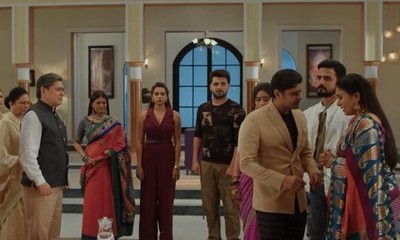 It was earlier seen that Sayi and Pulkit agree for the crucial surgery where Virat is much grateful to Sayi.

Sayi assures that Virat and Shruti will never get separated.

Virat has tears in his eyes as his love and wife is only Sayi but he cannot reveal the truth.

When Virat returns back home he gets confronted by Ninad who is much ashamed with Virat's deed.

Ninad is so disappointed with Virat that he declares him dead.

Poor and shattered Virat goes to Ashwini and confronts her if she does not trust her son Virat or has she also declared him dead.

Virat calls him to be dead for Ashwini and Ninad and cries in pain.

Will Ashwini show some belief on Virat?

GHKKPM: Sayi-Pulkit to operate Shruti, return of a villain

GHKKPM: Sayi-Pulkit to operate Shruti, return of a villain ...