GHKKPM: Bhavani gets admitted to the same hospital as Shruti, Big drama ahead (Latest Spoilers Alert) 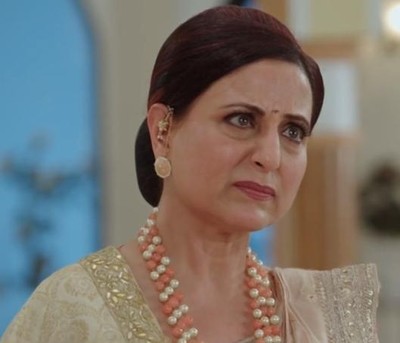 GHKKPM: Bhavani gets admitted to the same hospital as Shruti, Big drama ahead

It was earlier seen that Virat gets humiliated by his family for having an affair with Shruti.

Virat decides to walk out from the Chavan Nivas and he takes an exit.

Later, Bhavani along with Ashwini and Sonali attends the pooja of their neighbors where they get humiliated for Virat and Sayi's divorce.

Ashwini takes a stand for Sayi while Bhavani gets frustrated and at Chavan Nivas, she declares that she does not want to talk to anyone.

Bhavani meets with an accident

While climbing the stairs to her room Bhavani slips and falls on her face meeting with an accident.

Chavan's gets shocked and they immediately admit Bhavani to the same hospital where Shruti is admitted.

Now it will be interesting to see what will happen next when Chavan's will come across Virat, Shruti, and Sayi at the same hospital.

GHKKPM: Pakhi worries about herself as Virat takes exit from...