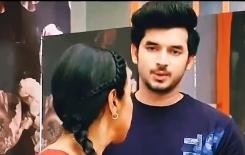 It was earlier seen that Anupama wanted to confess her love feelings to the entire Shah family and also her marriage decision.

But sadly Kinjal's pregnancy came in between which held back Anupama's good news.

Now Samar gets to see Anupama a bit upset where she is unable to move on in life.

Here Samar comes to support Anupama where he asks Anupama to move ahead in her relationship with Anuj as there will always be some or the other things or problems coming in their life which they can never stop.

Anupama is seen in mixed emotions where she is happy to have such a supportive son.

Anupama: Do Rahe for Anupama, will Vanraj turn the solution

Anupama: Do Rahe for Anupama, will Vanraj turn the solution ...

Anupama: Nazdikiyaan! Anuj restless after Anupama In the up...

Anupama: Anupama and Vanraj bash Toshu for not accepting Kin...

Anupama: Consummation track for Vanraj Kavya to spice up drama

Anupama: Consummation track for Vanraj Kavya to spice up dra...