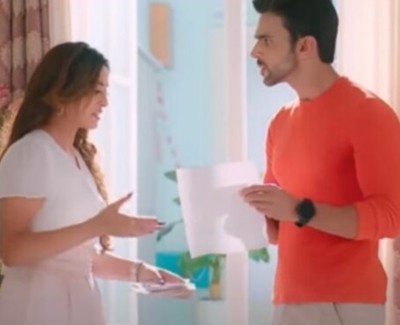 As seen so far, Ajit has taken a big move of staying at Swaran Ghar to protect the ladies of the house.

However, Swaran is not happy with his decision and asks him to leave while Ait makes his stand clear.

On the other hand, Kiran and Nimmo are trying their best to find proof against Ajit and Swaran with the help of Amber.

Amber has given them the letters and the photo but Kiran did not find anything worth scandalizing in Ajit's letters.

However, Kiran misses seeing the picture of Swaran and Ajit.

Vikram gets the picture of Ajit and Swaran

Now in the upcoming track, Vikram notices the picture and questions Kiran about it.

Vikram will identify Swaran in the picture and will wonder who the guy is.

Finally, they will decipher that the guy is Ajit Lamba and will see both of them having varmala in their hands in the picture.

Vikram connects it and assumes that his mother had cheated on his father and was earlier married to Ajit.

Swaran Ghar: Vikram blinded by his greed ditch all relations...