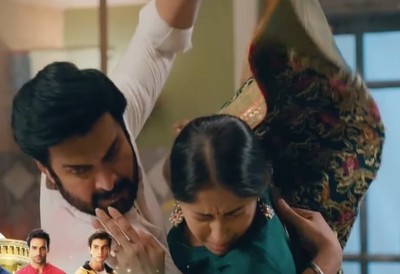 As seen so far, Swaran and the family joyously return after completing Mickey's make-up contract.

On the other hand, Vikram is up to proving his mother had an affair with Ajit before she married Kanwal.

Now in the upcoming track, we will see a new beginning to the love story of Ajit and Swaran.

Swaran walks into the kitchen and asks him about not picking up her calls.

Swaran finds him washing utensils and gets shocked.

Ajit asks her to not start complaining again about washing the utensils.

Swaran apologizes and says that she will manage and she slips.

Meanwhile, Ajit saves her from falling and he holds her.

Ajit fixes his eyes on Swaran and they get lost in each other.

Is this the begining of Ajit and Swaran's love story?