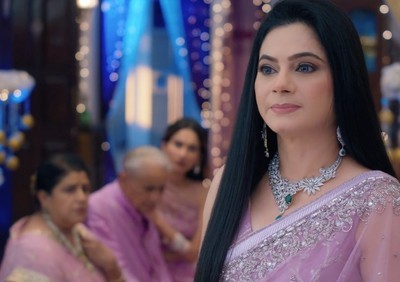 As Bapuji refuses to go to the hospital for treatment before Anupama's wedding Rakhi applauds Bapuji saying hats off to him.

Rakhi further gives an emotional speech saying that such are parents that never act stubborn, but they act stubborn when it is about their kids.

Rakhi further says that when parents act stubborn then even God cannot convince them.

Rakhi gets ready to do anything for Kinjal

Rakhi says that she is also a mother hence she understands Hasmukh's feelings.

Rakhi adds that there is nothing that she would not do for her daughter just like Hasmukh.

On the other side, Bapuji says that he is not going anywhere and that is final.

Anupama: Should Anuj Anupama perform court marriage? The up...

Anupama: New Chapter opens up for Anuj Anupama In the intri...

Anupama: NO more delay to the wedding track, Bapuji makes his last wish

Anupama: Samar's wedding to get fixed with a new lady, deets inside

Anupama: Samar's wedding to get fixed with a new lady, deets...