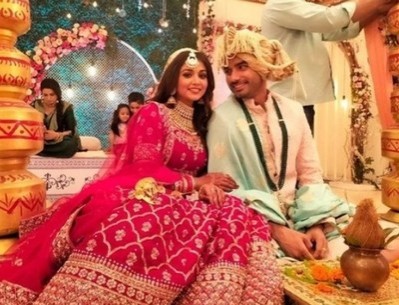 Colors TV's popular show Parineeti is all set to grab the viewer's attention with its spicy and dramatic storyline in the upcoming episodes.

As seen so far, Parineet arrives for Neeti's wedding unaware of the fact that her friend is going to marry her husband.

Further, Parineet begins the preparations for Neeti's wedding while Rajeev arrives at the wedding venue.

When Neeti gets nervous about her wedding, Parineet meets her and shows her eternal support.

However, Rajeev gets the biggest shock of his life when he finds Parineet and Neeti together.

Rajeev escapes from the venue

Rajeev finally realizes that Parineet is Neeti's best friend and he has ended up in a big mess.

Rajeev further escapes from the venue in the huge dilemma of getting married to Neeti.

What would Parineet's reaction be after learning the truth?

Parineeti: High Octane! Parineet vows to get Sanju and Neeti...

Parineeti: Rajeev takes up the responsibility of two wives ...