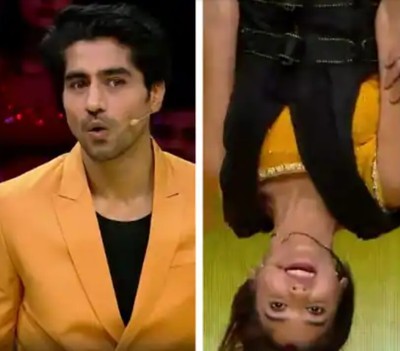 Fans of the popular show Yeh Rishta Kya Kehlata Hai love the chemistry of Harshad Chopda and Pranali Rathod as Abhimanyu and Akshara.

In a short span of time, both of them have made a special place in the hearts of people with their beautiful chemistry.

Now it's time that Akshara has to give the test of her love and all this will happen on the stage of Star Plus's popular show Sunday with Star Parivar.

This show is aired every weekend and in this, the actors of all the serials of Star Plus are seen giving a tough competition to each other.

This week is going to see a close fight between the team Imlie and Yeh Rishta Kya Kehlata Hai team.

In the show, we had seen Abhimanyu confessing his love to Akshara by hanging upside down on a tree-like spiderman.

Now Askhara will have to do the same thing at the behest of Arjun Bijlani, the host of the Sunday with Star Parivar.

Here all the pictures and videos of both of them keep going viral and Akshara's female avatar of Spiderman is also now covered on social media.