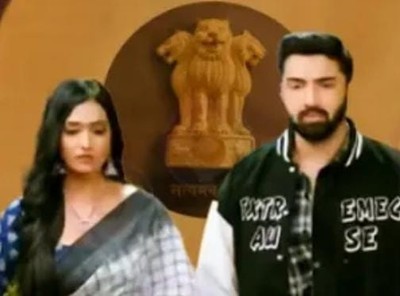 Zee TV's most popular and interesting show Bhagyalaxmi is up with huge drama.

As seen, Laxmi has taken huge blame on herself to save Ahana from humiliation.

However, this has taken a toll on Laxmi's marriage as this becomes solid evidence for Rishi's family to get her divorced from Rishi.

But there is a slight ray of hope as the judge puts a hold on her decision.

Surprisingly, the judge feels Rishi and Laxmi need to speak out about the pregnancy only then she can take a decision.

Hence, the judge gives twenty-four hours to Rishi and Laxmi to take a call and sends Laxmi back with Rishi.

Seeing Laxmi back home, Malishka loses her cool as she had made decorations for welcoming Rishi after divorce.

Further ahead, he questions Laxmi too about the pregnancy but she remains silent.

Her silence and this secret kill Rishi from within and he leaves without informing anyone.

Bhagyalaxmi: Rishi and Laxmi drench in love like never befor...

Bhagyalaxmi: End of Lovestory! Rishi and Laxmi head to the court for divorce

Bhagyalaxmi: Neelam fails judge's attempts to save Rishi and...

Bhagyalaxmi: High Action! Balwinder claim to be Laxmi's child's father Gets bashed up by Rishi

Bhagyalaxmi: Woah! Rishi and Laxmi team up to safeguard Ahana

Bhagyalaxmi: Adorable! Rishi trusts Laxmi beyond all odds decides to unmask the truth

Bhagyalaxmi: Crossroad! Will Laxmi save her marriage or Ahana's?

Bhagyalaxmi: OMG! Rishi confess to Malishka Laxmi not pregnant with his child