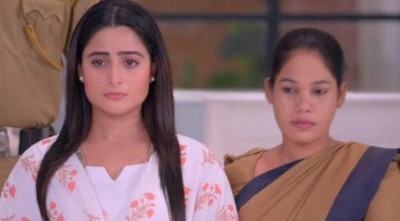 GHKKPM: Sayi kicks out Pakhi of Chavan Nivas to bear the consequences

The show is about to take a leap of six months in the show.

Sayi will ask the police to arrest Pakhi as she cheated on her by falsely becoming a surrogate mother to her child.

Sayi further says that Pakhi has to bear the consequences of what she did.

The police take Pakhi away while the whole family looks at Sayi in the hope that she will take back her decision.

Virat asks Sayi to think reasonably and stop Pakhi's arrest as she is family.

However, Sayi is adamant to send Pakhi to jail and asks Virat to stop favoring Pakhi.

Sayi warns everyone in the family saying that if they try to favor Pakhi then they will face her wrath including Virat.

Giving another warning, Sayi says that if Virat tries to bring Pakhi back to the Chavan House then she will leave the house along with her child.

GHKKPM: Pakhi in Jail to use big trump card against Virat-Sayi

Pakhi to plan and plot again against Virat (Neil Bhatt) and ...

GHKKPM: Pakhi over the moon Virat to finally touch her for delivery