Wo toh hai albela : Saroj to use Rashmi against Sayuri. (Upcoming Story) 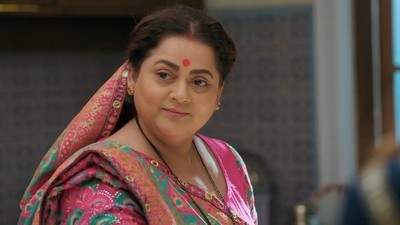 Wo toh hai albela Saroj plots against the sisters

Star Bharat's popular show Wo Toh Hai Albela starring Shaheer Sheikh and Hiba Nawab is gearing up for some sister drama in the show.

Earlier its seen that Rashmi slowly started turning against Sayuri to get in Saroj's good books.

Now it will be seen that Saroj will also plan her next move against the sisters.

Kanha was tensed about business and Sayuri encouraged him.

Kusum brought shagun to Rashmi's House saying that Saroj had planned to do Nakul and Rashmi's engagement.

Rashmi got ready in saree despite not comfortable with it just to impress Saroj.

She slowly started turning against Sayuri.

Sayuri shared with Kanha about the same.

Saroj's plan to separate the sisters

In the upcoming episodes we will witness, Saroj will reveal to Kusum that it was her plan to separate Rashmi and Sayuri.

She will create differences by plotting them against each other favouring one.

It will be interesting to see if Saroj will succeed in her plan.

Stay tuned for mo re details.