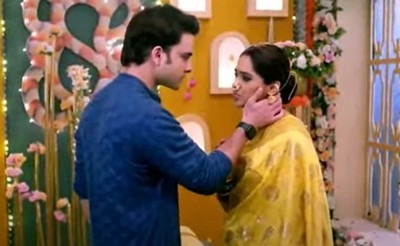 Kumkum Bhagya: Ranbir rushes to the mandap with proof of his child

Prachi and Siddharth's marriage is on the cards and Rhea is rejoicing in her victory.

However, Prachi is still hoping that Ranbir will stop her from marrying but that doesn't happen.

In fact, Ranbir suggests Prachi marry Sid for her and her child's wellbeing.

Now, Rhea and Alia are determined to get Prachi married at any cost.

Fortunately, on the day of marriage, Ranbir finds some strong clue that hints that Prachi is pregnant with his child.

This realization that Prachi is not having Siddharth's child pushes him into deep guilt.

Ranbir is unable to forgive himself for his blunder and rushes to stop the marriage.

Now it will be interesting to see if Ranbir will be able to stop Prachi and Sid's marriage or not.

Kumkum Bhagya: Rhea get closer to Ranbir for a passionate ki...

Kumkum Bhagya: Prachi pushes away Ranbir triggered by his de...

Kumkum Bhagya: What! Prachi breath her last in Ranbir's arms?

Kumkum Bhagya: What! Pallavi to stop Prachi and Siddharth's marriage?

Kumkum Bhagya: What! Pallavi and Sid's secret meet to trap Rhea in her own plan