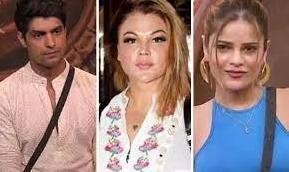 A huge fight breaks out between Sajid, Priyanka, Tina and Archana.

As Archana refuses to do any cleaning job after taking a shower, other contestants also revolt.

They feel Sajid should punish Archana and the former shares, ‘Nobody tells me what to decide.’

They tell, ‘We will also not work after taking a shower.’Sajid tells Archana to go to jail and she refuses there as well.Shiv Thakare tells Sajid that he knows how to punish her.

He takes all her clothes that are kept in his room and throws them in the living room.Here, Ankit Gupta is seen telling Priyanka about Archana’s behaviour.

He tells her, “She is trying to act like Rakhi Sawant. She doesn’t remember that Rakhi is known to be an entertainer and called for that reason, she didn’t win any season. She has planned everything and is doing everything for the camera.”

Later in the episode, Sajid and Archana get into a fight once again during tasks.

Sajid is also called to the medical room. Sajid meets the doctor and says, “My BP is high. That girl makes me lose my mind. Please isko bahar nikalo.”