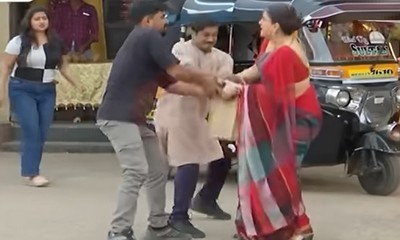 One of the most thriller tracks will kick start now in the upcoming episodes of Zee TV serial Kundali Bhagya.

Recently seen how Karan determines to marry Preeta at any cost so that he can get his fatherly right on Kavya.

The story takes an interesting U-turn as Karan once again sees Preeta in the market and thus begins to recall his love for her once again.

As Karan here follows Preeta and adores her from the distance,

The prime twist in the tale comes up when some thieves snatch Preeta's wallet and run away.

Thus, Karan here marks his super hero like entry and beats the goons to pulp.

So, Preeta is surely taken aback at how badly Karan beats them up for robbing her wallet but what shocks her more is when Karan introduces her as his wife.

As soon as Karan repeatedly calls Preeta Meri Patni, the latter gets totally shocked at it.

Now, when Karan handles the situation cunningly, let's see if Preeta can doubt him or not.