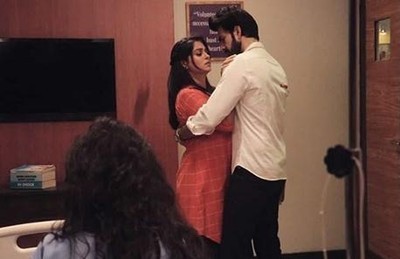 The current episode starts with Suman and Sonakshi talking about Pari where Suman agrees to take care of Pari here and then get her delivery one where after they will send the child to an orphanage.

Sonakshi stands against Suman’s such decision while is scared that the child will be called an illegitimate child of an unmarried girl.

Sonakshi is not shamed of the child and reminds Suman that she alone raised three kids and made them strong so why can’t they take care of Pari’s baby.

Suman is concerned for Sonakshi that after all everything will increase her responsibility but Sonakshi is not worried and thinks maybe his coming can be lucky for them.

Sonakshi suddenly gets a call and gets ready to meet the Producer as the girl whom he finalized has left for some other film.

Sonakshi is happy that Pari’s child is going to be lucky for them.

Rohit gets talking to doctors about the disease virus which spreads by air and Mr. Singh got attacked by it.

Rohit compels all the nurses, doctors to wear masks as the virus is air-borne and they will keep patients in quarantine section.

Rohit is concerned for the patients and has informed the health minister as they can’t take it lightly and they will have to manage the patients who can be infected.

Here Sonakshi meets producer Shukla, who is suffering from cold.

The producer apologizes for the last time when she asked advance and he instead refused to take her in the role.

Sonakshi refuses for any advance while the producer explains her character role.

Meanwhile Sonakshi sees Veena, Nishi and Vimmi that she signs Vimmi and the duos meet sneakily behind back Nishi and Veena.

Where they both get emotional, Sonakshi is shocked knowing Tanya lost her baby.

Nishi defends Rohan saying Pari is responsible as she got pregnant in extra marital affair while Veena thinks Rohan has also did mistake.

Nishi reveals that she has postponed Aakash and Deepa’s marriage while she compels Veena to get Rohit also married.

Nishi reveals about a girl from London which she has chosen for Rohit and is from their class.

Sonakshi is completely shocked hearing Vimmi that Rohit revealed everything to the family and beaten Rohan as he tried to harm Pari’s child.

Ajit is taking Naren back to home and wants him to not reveal his progress to anyone and also not bring him to hospital as they will be followed.

While Ajit is taking Naren, he sees Sonakshi and greets her.

Sonakshi gets emotional seeing Naren and asks about his health while Rohit who forgot to give file comes and sees Sonakshi.

Sonakshi asks them to not get worried for Tanya as she will be fine soon while Ajit tells her room number because she came to meet Tanya.

While Sonakshi is about to leave, Naren holds her hand and Rohit smiles.

Ajit gets happy as it’s the first time when Naren showed body movement after the accident and is a positive sign.

Sonakshi asks them to take care and leaves that Rohit recalls Nishi’s words and gets worried.

Tanya gets incensed angry seeing Sonakshi and asks if she came to celebrate because Pari is pregnant with Rohan’s child.

She starts throwing things at Sonakshi that Rohit comes and pulls Sonakshi saving her while he himself gets hurt on his back.

Sonakshi reveals that she learned how Rohan tried to harm Pari but he saved her while Rohit refuses saying he stopped Rohan from doing any crime or she would have sent him to jail.

Sonakshi gets angry asking if he is cheap or mean while Rohit compels her to leave.

Sonakshi leaves sadly while Rohit cries thinking she should stay away from his and his family.

Rohit and Sonakshi come across each other where she intentionally thanks Sumit for being with her and now he heart is safe after all she earlier gave her heart to a wrong person. Rohit gets furious.