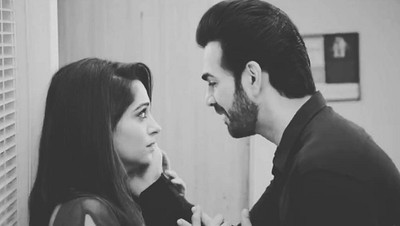 The current episode starts with Sonakshi stops Sumit from touching her while sumit questions her as if she loves Rohit.

Sonakshi refuses but Sumit insists her to accept the truth that her love for Rohit is still alive.

Sonakshi leaves for washroom while Sumit determines to make her confess the truth.

Rohit confronts Sumit for touching Sonakshi’s hair and her waits and calls it hi misbehavior while Sumit agrees that she is his girlfriend and he has full right.

Sumit confronts back Rohit for getting insecure and confesses about how they both are still mad in love with each other but are not confessing.

O Meherbaan song plays while Sonakshi cries thinking why she is stopping Sumit.

Rohit drinks alcohol thinking Sonakshi can’t love him but she has to hate him.

Next day, Suman reads the news of lethal virus spreading widely while then Sonakshi comes feeling dizzy and asks Suman to stay away while Suman gets antibiotics for her.

Pari comes for breakfast but Sonakshi sends her back to her room while she tells about Munya, to whom she has given off for some days as she is unwell.

Sonakshi talks to Munya and asks for her health where she confesses that the doctor asked her for blood test while when doctor calls Munya, Munya faints.

Here Rohit is shocked hearing Tanya on call about the baby. Tanya talks to Rohan if he is ready while she says that the baby will have breakfast, Rohit gets confused.

A patient died where Tulsi calls emergency saying a patient from government hospital.

Sumit comes home while Sonakshi compels him to stay away from her as she is ill while he gives masks to everyone in the family saying the virus is dangerous.

Sumit thinks if he could tell how much Rohit cares when Suman calls Sumit a good ghar-jamai*.

Nishi asks the staff to beware and wear masks while she inspects them.

Meanwhile a parcel comes for Tanya where Tanya has ordered a cradle for baby.

Yk reveals to family that Tanya is still in trauma of losing her baby’s loss and she will have to come out of it.

Rohit treats Munya while he is shocked knowing about Sonakshi.

Munya pleads before him to save Sonakshi that he recklessly calls Sumit to ask about Sonakshi.

Sumit reveals that she has some viral infection and has gone to meet her lawyer.

Rohit scolds Sumit asking her to call Sonakshi and get her come while here Sonakshi faints feeling dizzy.

Rohit rushes to Sonakshi’s house while Suman calls Dr. Patil while Sonakshi refuses to let Suman or Pari come and asks for doctor.

Rohit comes home but Suman refuses to let him in while yells at him, Suman and Pari are shocked knowing Sonakshi may be suffering from super virus.

Rohit knocks in Sonakshi’s room but she refuses to open while Rohit says he came as a doctor and she may be infected from virus which is dangerous. Sonakshi recalls their moments.

Sonakshi confesses that the death is coming to her and she will choose to die rather than getting treated by Rohi’s hands.

Sonakshi decides to jump down and commit suicide while Rohit, Pari and Suman are all shocked.