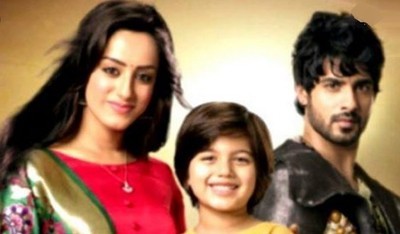 The current episode starts with Rudraksh helping Prisha in getting Saransh’s breakfast ready.

Prisha goes to get ready for the hospital as she has decided to continue her work but Rudraksh stops her and gives her euipments.

Rudraksh handovers mop and compels her to start the work while Ahana and Mishika smirk.

Rudraksh commands Prisha to do all the work of servants while he asks her to leave the house and let Saransh stay with him or she will become a servant.

Prisha realizes Rudraksh wants to torture her thus she refuses to leave and starts working while Saransh stops her and helps her.

Rudraksh agrees saying both will work and will do the task fast but Maa interrupts in and stops saying Saransh is a kid.

Gopal and Vasu get shocked seeing Prisha and Saransh cleaning the house that he stops Prisha and throws the water.

Gopal calls the khuranas heartless where Vasu and Ahana get into a heated argument.

Balraj comes and refuses saying Prisha is neither their daughter nor daughter-in-law and they don’t regard her as Laxmi.

Balraj asks Gopal and Vasu to take away the burden Prisha from while Rudraksh asks them to take Prisha only as Saransh will stay here only.

Prisha refuses to leave while Rudraksh asks if she is insulting her parents who call her their pride.

Prisha goes with Vasu and Gopal where Gopal asks Prisha of why she is tolerating everything when she is an educated girl, a doctor while Prisha says she can’t leave Saransh.

Here Yuvraj is getting mad as his whisky has finished and the one crore which he took from Rajeev is all spent in wedding, he laughs evilly.

Prisha tells her parents that she will take back Saransh’s custody from Rudraksh and she is a fighter, she will fight for her son.

Yuvraj thinks once Prisha will give the trust fund he will take all the money.

Meanwhile here Gopal thinks to change the situation while Prisha gets her bag to the room.

Rudraksh asks if she is stealing money, she has come to keep her clothes in the cupboard.

Rudraksh and Prisha argue when Prisha shows the empty space in cupboard but Rudraksh fills it with the files and refuses to let her.

Rudraksh says everything is fair in love and war and this is war while Prisha agrees saying she will take Saransh back.

Yuvraj calls Prisha and starts his drama while Prisha tells that she is looking for some online school for Saransh but Yuvraj interrupts saying he will get his admission done.

Yuvraj asks Prisha to meet but Prisha refuses asking him to not call her while Yuvraj gets shocked.

Balraj yells at Saransh while Saransh confesses Ahana asked her to shred the documents while Ahana slaps him but Prisha stops her and warns her.

Gopal brought NGO women who ask about child labor in house meanwhile Rudraksh hugs Prisha and kisses on her forehead before the women.