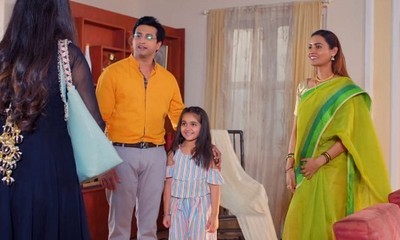 The current episode starts with Pakhi and Virat's argument when Virat is tensed for what all happened while Pakhi instigates him against Sayi.

Pakhi criticizes Sayi and her behaviour towards him.

Pakhi reminds Virat that he ruined three lives with his stupid reason of marrying.

Bhavani is pissed off with the huge family drama and curses Sayi.

Mohit gets Samosas for Karishma but Karishma gets angry knowing Mohit didn't get any job.

Mohit reveals that he will follow his passion after Sayi Vahini motivated him while angry Karishma yells at Mohit for listening to Sayi.

Herein Sayi comes to Pulkit's house with the hope that she will find the truth.

Sayi gets a huge shocker when a woman welcomes her who introduces herself as Madhuri.

Sayi gets upset realizing she is Pulkit's wife.

Sayi tries to see Pulkit's family picture in the house but she gets it nowhere.

Sayi is about to leave when Pulkit comes with Harini.

Harini meets Sayi when she calls Madhuri Mom and this leaves Sayi shocked.

Sayi gets upset with Pulkit coming late and also that he is married when Devyani is still waiting for him.

Pulkit enquires Sayi about what happened when Sayi doesn't reveal her family matter.

Sayi then directly questions Pulkit about where he used to live in Sundarnagar.

Pulkit says Chavan house and this gets Sayi super shocked.

Bhavani asks Pakhi to give food to Virat as he is still upset.

Virat refuses to eat food but when Pakhi insists, Virat mistakenly hits the food plate and it falls down.

Pakhi bursts out at Virat and complains that he must have eaten the food if Sayi brought it for him.

Pakhi and Virat have a major confrontation.