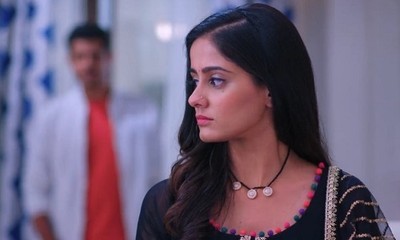 The current episode starts with Mohit takes a strong stand for Sayi.

Mohit calls Sayi his younger sister and reminds Sayi about how she stood for her when everyone was against him.

Mohit announces that he will bring food for his Vahini with his own earned money.

Karishma and Sonali try to stop Mohit but Mohit bursts out.

Mohit shows his disappointment in Virat and tells Virat that he doesn't want to become a man like him and Virat is no more his inspiration.

Sayi cries when Ashwini hugs her and tries to console her.

Virat is super angry and pissed off.

Later on, the Chavan family is enjoying food while Bhavani praising Virat about how Virat has shown his manliness today.

They laugh and make fun of Sayi's sufferings.

Sweet Devyani gives chocolate to Sayi when she sees her crying.

Devyani reveals Sayi about Pulkit and requests her to not reveal Pulkit's name or the family will hurt him.

Pakhi brings food for Virat when Virat bursts out in anger.

Ashwini warns Pakhi to not dare build her palace on the roots of someone's shattered relationship.

Sayi gets emotional with Usha about how Mohit took a stand for her.

Ashwini meets Virat and gives him a reality check.

Ashwini reminds Virat about how Sayi stayed silent when he planned Ladakh trip with Pakhi.

Ashwini reminds Virat about he misbehaved with Sayi and behaved like his father Ninad.

Ashwini makes Virat realize his mistake when Virat ends up shattered in tears.

Sayi packs her bags and compels Usha to pack her bag as they will be leaving the house.

Virat gets shocked and asks Sayi where is she going? Sayi keeps doing her packing.

Virat holds Sayi's hand and asks if it hursts.

Sayi gets angry and says she will be leaving the house.

Later on, Pakhi gets shocked entering in Sayi's room.