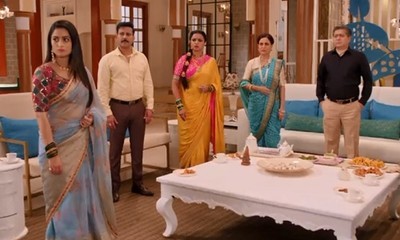 The current episode starts with Sayi invites the family to her college function but the family members refuse to come.

Pakhi pokes her nose in Sayi’s matter when Mohit defends her.

Bhavani, Ninad, Sonali, and Pakhi all one by one taunt Sayi when Ashwini asks Pakhi to not interfere as Sayi is inviting the family in her own way.

Ninad refuses to see Chavan’s Bahu dancing on the stage.

As Mohit calls Sayi Kranti where the time has started to change and they should learn to move on, Omkar scolds him.

Karishma insults him when Ninad taunts his acting and compels him to use his stupid words in theatre only.

As Sayi offers money to Karishma, Mohit praises Karishma and compels her to see that only Sayi Vahini offered her money still she blames her.

Ashwini stop Pakhi when Pakhi acts sympathetic saying she shouldn’t speak in family matters as it is not her husband’s house, but his husband’s Mama’s house.

Ninad and Bhavani feel bad while Pakhi and Sayi have an argument as Sayi gives befitting replies to her.

Sayi accepts the challenge saying she will make them attend the function.

Later Virat returns and Sayi asks him to freshen up quickly and have dinner.

Virat and Sayi have dinner while talking about the annual function while Virat teases Sayi calling Ajinkya, Anirudh.

They have lovely time together.

Police enters the Chavan house while shocking Ninad, Bhavani, and Omkar reveals that Sayi met with an accident because of the mental pressure they asserted on her.

GHKKPM: Sayi wants Virat to gift one Ruby for Pakhi too