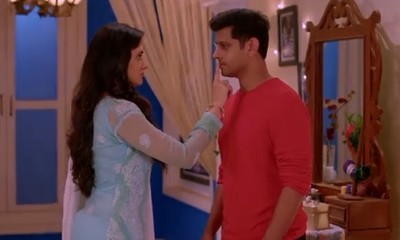 The current episode starts with Ajinkya and his friends mark their surprising entry in Chavan Niwas to celebrate Sayi’s birthday.

The Chavans Ninad, Omkar, Bhavani, and Sonali get pissed off seeing Ajinkya and others for coming so late in someone else’s house.

While Ajinkya and his friends wish Sayi Happy Birthday, Virat feels super envious when Ajinkya feeds the cake to Sayi and then applies it on her face.

Virat tries to stop Ajinkya but Sayi asks Ajinkya and others to continue.

This pisses off Virat more and he gets super angry.

Bhavani adds fuel to his jealousy by trolling Ajinkya and Sayi’s closeness before Virat.

As soon as Ajinkya and his friends leave, Virat also leaves.

Virat reminds Sayi of hugging Ajinkya when she touched his (Virat) feet.

Virat surprising Sayi questions her if he is an old age man that she touched his feet and hugged Ajinkya.

He then reminds Sayi that Ajinkya is young so she likes him, but not him (Virat).

They both have a cute argument when Sayi makes Virat see himself in the mirror and realize that he is an old age man.

Virat and Sayi's moment of confession

Virat confronts Sayi and shows his annoyance over her intimacy with Ajinkya.

Just when Sayi says that she will be leaving the house soon, Virat stops her and finally confesses to her that he likes her.

Pakhi is eavesdropping on them while Virat is proposing Sayi with the diamond ring.

Virat is happy that Sayi remembered his diamond ring.

Virat quickly takes it out and makes Sayi wear the ring when he says that he likes her.

However, before he could propose his love to Sayi, Sayi exclaims that if he gave this ring to her like a husband gives the gift to his wife, then she can't accept the ring.

Virat gets sad and teary eyes but hides his emotions.

Virat lies to her that it's her birthday gift while he asks her to never remove it from her finger even if he dies, Sayi closes his mouth and scolds him for taking such.

Pakhi gets teary eyes seeing Virat and Sayi while when Sayi that she will leave the house, Virat yells at her.

Virat reminds Sayi that once she will leave, he never meets her, Sayi gets upset.

Sayi hasn't reached home while the family members are super worried for her.

Virat tells Ninad and his family that he is tensed for Sayi as she took 50,000 rupees before leaving for college.