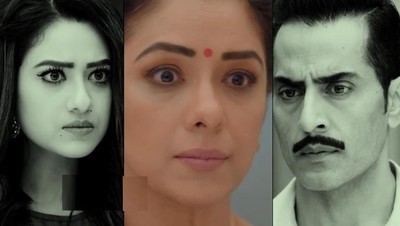 The latest episode of Star Plus Anupama begins with Samar Pakhi's fight where Paritosh also joins them.

Paritosh and Samar try to hit each other when Bapuji witnesses them and makes them quiet.

Next morning Kavya makes chocos for Pakhi and the rest of the family members.

Vanraj and Anupama begin to distribute pamphlets on the road Bapuji also joins them and helps them in work.

Rakhi Paritosh and their client gets to see Vanraj Anupama on the road who fumes in anger.

Rakhi reaches Shah House where she calls Vanraj beggar and his Bapuji too.

Major argument amid Rakhi and Vanraj

Vanraj loses his cool and calls Rakhi with no respect for ther.

Major argument amid Rakhi and Vanraj is seen.

Anupama asks if Kavya has a problem with her Kavya says Yes.

Anupama asks Kavya if she has a problem with Vanraj and her friendship Kavya says Yes.

Anupama again asks if Kavya has a problem with Vanraj working at her academy Kavya says Yes.

Enough is Enough Anupama turns fierce and asks Kavya and Vanraj to get out of her House and Academy.

Anupama: Someone is waiting to spice up Vanraj Anupama's life

Anupama: Someone is waiting to spice up Vanraj Anupama's lif...

Anupama: Vanraj drags Anupama on road to settle scores The ...

Anupama: Rakhi pulls the string to force Paritosh In the up...