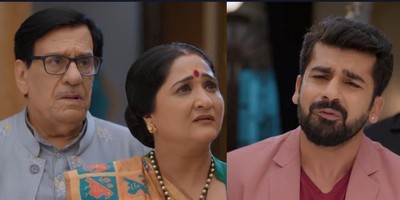 The latest episode of Star Plus Anupama begins with Anupama pulling Kavya and making Kavya part of the award.

Pakhi does not want to support Kavya but Anupama does.

Bapuji feels proud of Anupama who is everyone's Guru.

Vanraj gets angry at Kavya for leaving Pakhi alone behind in the competition.

Kavya starts giving reason before everyone could fire her and states that she is not at fault.

Baa also supports family instead of Kavya when Paritosh speaks up.

Paritosh supports Kavya against the entire family and begins his insulting drama before Shah family.

Paritosh states that he feels ashamed that he belongs to Shah family.

Vanraj tries to stop Paritosh but Paritosh does not stop this time.

Vanraj asks Paritosh to leave right away as no one will stop him this time.

Bapuji decides to leave the house where Baa agrees with his decision before they face more insult.

Vanraj and Anupama are seen in distress.