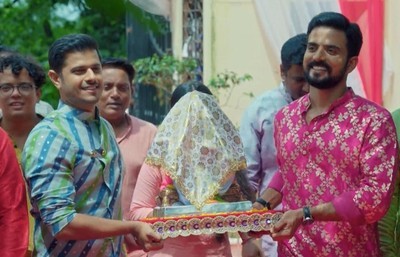 Sayi and Pulkit meet the dean and she receives the transfer certificate.

Chavans gear up for Ganpati puja.

Dean and Pulkit try to convince Sayi to stay in Nagpur and proceed with her studies.

Sayi tells that she will need some time to take this decision.

Pulkit tells Sayi that she can remain at his place as well or she can stay at his friend's place.

Pakhi opens the door with the aarti thali and Sayi shows you at the door.

Virat and Samrat come along with the idol and Samrat tells that he called the kids also.

Virat meets Chikoo and her companions.

Virat tells Chikoo that he will send an officer to help her in discovering her mother.

Later Chikoo and give a rocking performance together.

Virat and Samrat reach Chavan Nivas with the Ganpati murti.

Ashwini stops Sayi and calls Sayi to do the aarti as Virat bought the idol.

Samrat questions Pakhi that why does she jump into an argument and start insulting someone.

Virat tells that this time he will make modak.

Sayi says it is between them and she cannot reveal the secret.