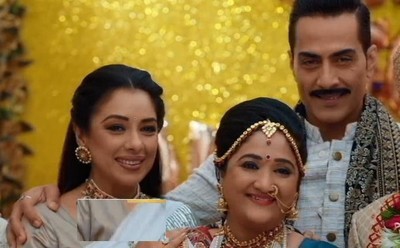 Bapuji feeds Baa with much love where she shies away but she gets family support.

Anupama serves sweet to all and at last one one dish was pending where she offers Anuj and Vanraj.

Anuj asks her to give it to Vanraj when Vanraj takes he bowl and gives the same to Vanraj as he is the guest in their house.

Anuj praises the sweet when Vanraj says everyone likes the dish made by Anupama.

Amid the dance performance, Vanraj gets a call and later Anuj too gets a call where he does not answer.

Anuj dreams of Anupama and dances with her romancing her.

Later the family sit together and talk about marriage decision and failed marriage too.

Everyone give their opinion while Anuj gives the best opinion when Paritosh points out that he is single thats why he is praising marriage.

Anupama gets to see negative vibes from Paritosh and Vanraj.

Kavya in a furious tone pulls Anupama away from Vanraj

GK keeps his words that he wants to get Anuj married soon but he likes only one person.

Vanraj asks Pakhi to see Baa Bapuji's marriage when she says that she will never get married.

Kavya fumes and pulls Anupama away calling her Baharwali.

Anupama: Vanraj straight away denies as Anupama asks to patch up with Kavya

Anupama: Vanraj straight away denies as Anupama asks to patc...

Anupama: Vanraj receives a call for a proposed plan

Kavya (Madalsa Sharma) gets triggered to bring Shahs on road...

Anupama: Pakhi says no to her marriage, future disaster for Shahs