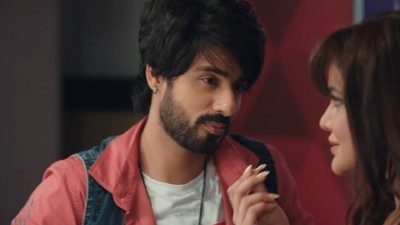 Revathi sends the waist coat to forensic lab to know why Rudraksh has thrown it in the water.

She also remember that he was not wearing waist coat while he was meeting her out side the Hospital which he was wearing in the School.

The Forensic report says that the blood is not identified and Revathi decides to confront Rudraksh.

Mohini flirts with Rudra seeing him while Preesha scolds her for doing so and drags him with her.

Revathi tells Rudra that she wants to question him as a Commissioner and asks him what was his waist coat doing in water. She questions him about the blood.

Rudra tells her that his finger got cut because of which the blood got on his waist coat and he has given it to his servant. Revathi breaks down and he consoles her.

Rudra gets ready to go on a date with Mohini while Preesha decides to ruin it.

Revathi meets the Singer from Jagrata

Revathi questions the guard about the black cover in the dust bin to which he tells her the events.

Revathi meets the singer from Jagratha and questions her. The Singer tells her that it felt like Rudraksh and Preesha were following her and she doesn't understand the reason.

Rakesh tells her that Rudra and Preesha has problem with Dev hence they would have done something to him.

Revathi asks Rudraksh whether he has a problem if she sends her team to check the Lake.

YHC: Revathi gets on a mission to catch the culprits, Rudra turns prime suspect

Yeh Hai Chahatein: Revathi gets on a mission to catch the cu...