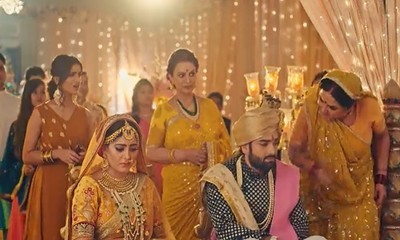 The current episode starts with Aryan and Arpita’s emotional breakdown as they both share brother and sisterly love. They hug each other and Aryan thanks Imlie.

Here Narmada bought everything from Nanda’s dowry list. When Nanda asks Narmada to recheck, the latter rechecks the electronic items, the furniture, gold, silver, bike, car and many more things.

Nanda happily agrees to bring Sundar for the marriage when suddenly Imlie comes. However, she fails to see anything as Narmada already asked the servants to shift the things without letting anyone know about it.

The wedding ceremony begins and Imlie is suspicious about seeing Nanda and Narmada happy.

Imlie lies to Nanda about the police when shockingly the latter confesses about the dowry.

Everyone gets shocked hearing about this while Imlie now threats Nanda and Narmada about what they did.

Nanda defends herself but Sundar agrees with Imlie. Next, Imlie makes Narmada understand that giving dowry is wrong and she is becoming a part of the big crime.

Imlie takes stand for Sundar and Arpita against dowry

Nanda compels Sundar to stand up and leave but the latter is determined to marry Arpita.

Next, Imlie compels Nanda to measure the weight of the things and Arpita, whichever will be heavy, Nanda will take the same to her home.

The latter is happy thinking the dowry will be of course heavy. However, when the servants keep boxes on the weight scale, the scale doesn’t move.

Arpita comes out heavy over all the dowry. Everyone is shocked but when Neela throws away the boxes exposing Imlie’s trick,

Imlie recalls exchanging the things with the empty boxes.

A mystery woman comes near Imlie.

Imlie: Aryan and Imlie's chupke chupke love next in

Imlie: WHAT! New Enemy trying to kill Imlie One of the most...

Jungle Twist next for Aryan (Fahmaan Khan) and Imlie (Sumbul...