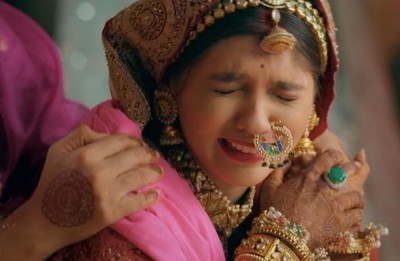 Akshara and Abhimanyu take blessings from Goenka's and Birla's.

Neil removes Akshara's sandal and makes her wear it saying that from today he is her Laxman and she is her Sita.

Harsh reveals about the cocktail party to Goenka's while Manish gets irked.

Abhimanyu asks Harsh to invite Akshara and her family too.

Goenka’s and Biral’s join Abhimanyu and Akshara in a cake cutting ceremony.

Mahima and Anand get irked post-Harsh announce Abhimanyu as the face of the hospital.

Later, guests talk with Harsh and Mahima and say they just learned that Abhimanyu’s wife is not a doctor.

Mahima introduces Akshara to the couple and Manjari comes to support Akshara and reveals about her music therapy in Birla' hospital.

The couple gets impressed by Akshara while Manjari gets determined to never let Akshara face the same fate as her.

Suhasini asks Abhimanyu to read a poem before taking Akshara with him.

Swarna asks Akshara to bind the whole family like Kartik and Naira post she panics thinking about her post-marriage life.

Akshara breaks down into tears saying that she can't do this.

Abhimanyu explains to Akshara that in their profession a patient is given priority more than anything in the world.