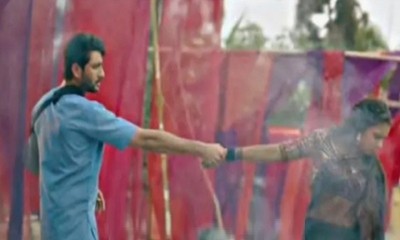 The current episode starts with Imlie getting worried amid the bad traffic. Therefore, she starts hitting all the cars threatening them to give her space or she will damage their cars.

However, before her, Jyoti gives the blood to the doctor and so Narmada thanks her.

Imlie gets happy seeing Aryan’s condition stable and thanks Jyoti while the latter recalls how she bribed the peon for the blood.

Imlie talks to Narmada when suddenly the latter slaps hard shocking everyone to the core.

Thereby Imlie fails to explain the truth to Narmada that she also went to get the blood donor.

Narmada now blames Imlie for taking revenge for her suffering and reminds her of how she broke the Tripathi Family. Shockingly Narmada accuses her of using rich men for success and this time Aryan got into trouble.

Imlie breaks down and cries hearing her accusations. While she questions her about what mistake she did, the next Narmada says that she hypnotized Aryan with her fake tears but now she can’t lose her son.

Narmada reprimands Imlie for meeting Aryan. The doctor asks the family to meet Aryan when the latter thanks Sundar for handling everything well behind his back.

Narmada scolds Aryan for his carelessness and praises Jyoti for saving him. Imlie is walking on the street heartbrokenly when here Aryan turns to leave to meet her.

However, he is stopped by Narmada and gets shocked when the latter blames Imlie for his condition.

Aryan is shocked at Narmada’s statement and defends Imlie and questions her for judging Imlie.

Suddenly Narmada accuses Imlie of doing black magic on her son while she is sure that she will leave him one day just like Aditya.

Aryan saves Imlie from falling when the latter confesses that she is not right for him.

Aryan questions Imlie about why she remained quiet after Narmada insulted her.