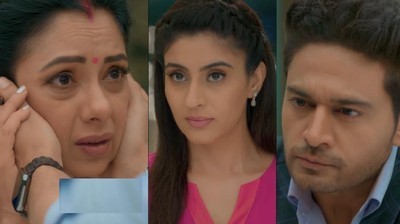 The latest episode of Star Plus Aupama begins with Vanraj asking everyone what happened to Kinjal.

Vanraj screams when Anuj replies that Kinjal and baby both are fine.

Vanraj creates hell lot of drama before Anuj Anupama Ankush Barkha where they all dislike the same.

Anuj asks Vanraj to stay in his limits and not create any chaos.

But Vanraj as usual gets into major argument when Bapuji had to shout and stop the drama.

Bapuji explains Vanraj that its was not Anupama's mistake but Vanraj wanted Anupama to take care of Kinjal.

Vanraj decides that his kids will not enter the house ever again and Vanraj wants to take Kinjal away too.

When Kinjal decides to stay with Anupama and Vanraj walks away.

Anupama takes care of Kinjal where Paritosh also stays behind with her.

Barkha apologize before Kinjal for her mistake

Barkha gets a glass of milk for Kinjal and apologizes for her mistake.

Later Barkha asks Anupama that Kinjal should not have come here as the last three months in pregnancy is much more risky.

Anuj agrees with Barkha and they all get against Vanraj.

Anuj asks Anupama to lets go and drop Kinjal back home and they dont want to see Shah Parvair here for sometime.

This leads to crack in Anuj and Anupama's relation where Anuj wants Anupama to stay away from Shah Parivar and Vanraj's unwanted drama and Tamasha.