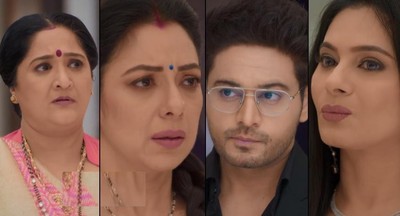 The latest episode of Star Plus Anupama begins with Anuj and Anupama sorting out their differences.

Anuj and Anupaam confess love and thinks that their views can be different for some reasons.

When she comes out she meets Barkha who tries to add much salt to her relation with Anuj.

When Anuj comes from behind saying Anu Anu leaving Barkha shocked their fight is sorted and their love drama begins.

Anupama warns Barkha that she does not allow anyone to add more salt in her food and relation.

Next morning Anupama asks Barkha to settle the bills before signing the cheque amount.

Abhik decides to use Pakhi as she is Anupama's Ladli Beti.

Pakhi is happy to get all the attention from Adhik.

In Shah House Bapuji helps Baa in the house work when Rakhi marks her entry.

Back in Kapadia Sadan Vanraj calls Anupama 26 times where all his calls are missed.

Vanraj wants Kinjal back home as soon as possible.

Rakhi invites everyone for Kinjal's baby shower in her house.

Anupama: Barkha in tightspot Anupama to expose her first Her...

Anupama: Vanraj wants the ace card to rule back like a King

Anupama: Vanraj wants the ace card to rule back like a King ...