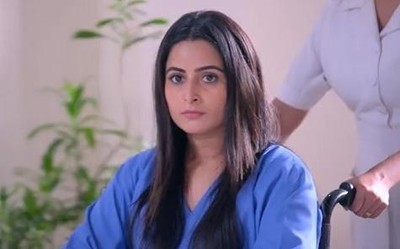 The current episode starts with Sayi convincing Geeta and her husband to come with her to the hospital when Virat also reaches there.

Sayi is on her way to the hospital when Virat tries to tell her on the call about how the surrogacy process is done with Pakhi but the latter fails to hear anything.

In the hospital, the doctor gets shocked seeing Pakhi in place of Geeta and thus swears to inform Police about how Bhavani and Pakhi ditched them.

Sayi and Bhavani have a major confrontation about the truth. Bhavani blames Geeta for coming late and happily talks about how Pakhi conceived the child.

Sayi is taken aback by the news while next she confronts Virat.

Virat tries to make her understand the situation when Geeta reveals how a doctor Madhuri Apte from the hospital asked them to sign a form and the terms and conditions made them step back.

Sayi doubts Pakhi as she recalls Pakhi begging Virat in the police station to let her conceive the child.

When Bhavani praises Pakhi saying how she got all her tests done and was super ready to help them, this makes Sayi’s doubt intense.

Therefore, when the nurse brings Pakhi, the latter gets shocked seeing Geeta and thus hides her face.

Sayi angrily runs to Pakhi but Bhavani comes in between them.

Pakhi is worried as if Geeta will expose her and so she calls Geeta and asks her to meet doctor Sayi in room number 3 when in actuality she (Pakhi) is there.

Geeta recognizes Pakhi in the blink of an eye but the latter asks her to stay back and hear her first.

Geeta swears to inform Sayi about how Pakhi betrayed them but Pakhi grabs her hand and stops her.

Virat and Sayi have an argument.

Sayi takes Virat’s phone and calls Geeta when Pakhi touches Geeta’s feet and begs to her to not reveal the truth to anyone.

Sayi comes and gets shocked seeing everything.

GHKKPM: Heartbreaking news for Sayi blames Virat for betraying her

GHKKPM: Ayesha Singh finds it challenging to play the role of mother, Will say goodbye?

GHKKPM: Back to Back Twist! Patralekha to die from a deadly disease

GHKKPM: Back to Back Twist! Patralekha to die from a deadly ...