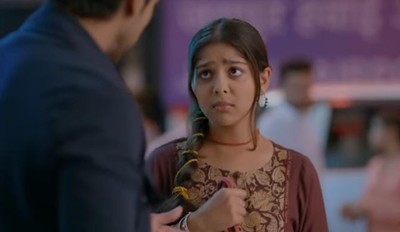 Episode begins with Faltu leaving Ayaan's hands after knowing about his engagement.

She says he needs to be with his family right now not with her.

Ayaan shows concern to her as she is not familiar to this place and he wants to take her to hotel.

He calls the cab for her and she says she will manage herself.

Ayaan asks her to not trust anyone but she will directly go to the hotel and will check in.

He tells the driver to drop her safely. He gives cash and card to her for her expenses.

Faltu recalls the previous mishaps and incidents happened with her.

Charan decides to face the agitated villagers who are criticising him for helping his daughter run away.

Charan ignores Jamna's warning and says he cant hide from the villagers for lifelong.

Villagers start questioning Charan about Faltu's whereabouts and he answers the same that he doesn't know where she is.

Faltu gets into trouble

Faltu calls him to let him know that she reached safely.

He feels relieved and acts like he is talking to a visitor for their guest house.

He lies to all after disconnecting the call and then they leave warning him.

Janardan worries thinking why Ayaan has not come yet.

He proclaims to Savita that if Ayaan ruins his reputation in front of Kanika then he will think Ayaan is not his son anymore.

Kanika tells Tanisha that if Ayaan is irresponsible then she will get her married to Siddharth.

Siddharth gives his consent immediately that he will marry Tanisha.

Kanika says she will choose that person who will get the property.

Tanisha tries to call Ayaan and Kanika asks her to think about her self respect.

The cab driver talks to his partner and plans to loot Faltu.

He takes her to a wrong direction and she runs away after finding his gang members.

Precap- Faltu gets caught by the goons, and they block her to stop her from leaving.

Faltu: Ayaan marries Faltu to save Faltu from Pappi’s trap