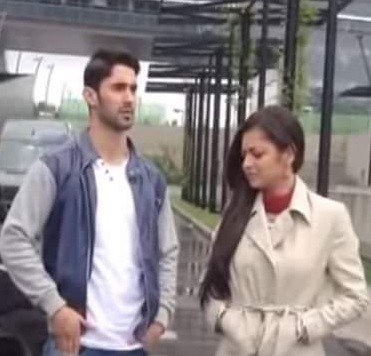 The episode starts with Naina running towards Amit and Amit says that Naina I love you and Naina gets happy.

Actually Amit was telling Hazel who was standing just behind Naina that Amit loves Hazel.

Amit clearly tells Naina that now there is nothing left between Naina and Amit.

Hazel comes in between and starts scolding Naina as Raghav comes from behind and starts protecting Naina from Hazel’s cruel words.

Naina starts walking towards the train and Raghav pulls out Naina thinking that Naina is going to do suiside.

Naina tells raghav that Naina could not even think of doing suicide and Naina was just looking for the train to come as people look in India.

Raghav starts talking to Naina and telling Naina to go and scold Amit so that next time Amit does not do this to any other girl.

Naina gets inspired by Raghav’s words of going and fighting with Amit for Naina’s insult and also thanks Raghav for inspiring Naina.

Naina’s mother gets amid tension as she thinks that what to do as Naina is already in Austria.

Raghav’s chichi talks to Ira that Sanjana is back and Veer and Ira have to take Sanjana along with them in every party.

Sanjana talks that why did masi send Raghav to pick up Naina and not Veer.

Naina goes to Amit again and starts talking to Hazel her heart out and talking about Amit’s betrayal.

Naina also scolds Amit and gives the credit to Raghav for the strength that Raghav gave to Naina.

All the surrounding people start praising and clapping Naina for Naina’s courage.

A lady comes and gives a flower bouquet to Naina and Raghav.

Raghav places a flower out of the buquet amid Amit and Hazel and prays for their dying love.

Raghav starts following Naina and Naina gets angry for Raghav’s following her but Raghav says that even Raghav is going to the same place where Naina is going.

Raghav gives the bouquet to Naina and goes and Naina turns back and thanks Raghav that again Raghav has helped Naina in an altogather foreign land.

As Naina turns back Raghav had already gone and Naina continues to climb the stairs to her brother’s house.

Pam is collecting all the things to do charity and just than Veer’s mother comes there starts arguing with Pam as she cannot give more things in charity that are so costly.

Just than dadi comes and says that Sanjana has come and no one has told dadi about her.

Dadi just ignores Pam and goes from there.

Naina hides what Amit did to Naina and starts crying.

Precap: Raghav watches Naina that she has come to sell her ring and amid tension and thinks of helping Naina.