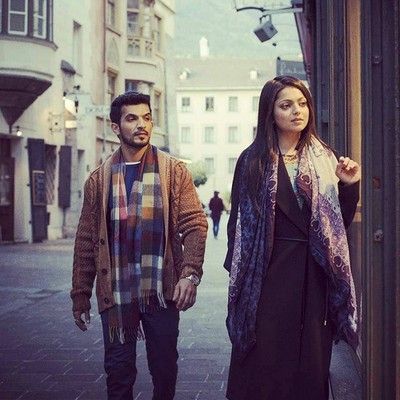 Raghav says thanks to Naina for her help.

Rajeev and Naina are on the road making a plan to make Rajeev dash amid any vehicle so that they can ask for money from the vehicle owner and can spend the next six months easily.

Naina’s mother goes with Zeenu to the hospital and tells that I know that Naina is alone in the stranger country and needs help.

Naina’s mother is all set to remove the stencil amid Naina’s mother’s heart and collect money to send to Naina.

Rajeev is trying his best to dash with some car but is not successful and Chanchal decides to try it herself.

Naina tells Raghav to go and check with the hospital and Naina asks Raghav that there is someone at home to help Raghav to which Raghav replies that yes there is a very sweet dadi at home for Raghav.

Raghav and Naina are talking that they are strangers and they are still helping each other.

Rajeev hides amid the trees as Chanchal tries to go on road and there comes Veer’s car and dashes with Chanchal’s feet.

Rajeev starts to abuse Veer and asks that what has Veer done and now Veer has to take care of Chanchal’s expenses.

Now, Chanchal starts her acting and does acting of getting injured and fumbles to take Chanchal to hospital as her baby is not moving.

Meanwhile Raghav introduces himself as Raghav Mehra to Naina to which Naina tells that Raghav is the founder of Mehra foundation.

Naina is about to tell that she is the lady from India to whom Raghav has helped than all of a sudden Naina receives Rajeev’s phone and tells that Chanchal has been met with an accident and Naina has to rush to hospital.

Pam has applied a face mask and is sitting on a rest chair when Balram tells Pam that Veer and Ira have been met with an accident in a drunken state.

To which Pam replies that first they need to report to the police and so that Veer gets arrested and on time Balram and Pam go and release Veer from jail and Sudha cannot than tell no for Veer and Sanjana’s marriage.

Pam reports the accident case to the police station

Sudha is talking about Raghav to dadi when Pam enters and tells that Veer has met with an accident to an Indian girl who is six months pregnant.

Sudha asks how is Veer and Pam gets very happy.

Pam tells dadi that Balraj and Pam will save Veer anyhow.

The police says that Veer is drunk and they have to do a police case to test Veer’s drunken status first even before Veer talking to the lawyer.

Chanchal tells that she is good to Rajeev and starts acting again as Naina comes and Naina asks how is Chanchal.

Naina gives some money to Chanchal and says that Naina will manage the money.

Chanchal says that the bills will be paid by the person who has done accident.

Naina says that why should we depend upon others when we can manage.

Raghav reaches home and asks the maid where are everyone to which the maid replies that all have gone to hospital as there is some emergency.

Raghav calls Veer to which Veer replies that Veer is amid police station doing drink and drive test as Veer had mistakingly done some accident.

Naina (Drashti Dhami) goes against her family to save Veer f...