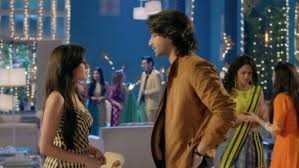 Abeer is happy as he celebrates with Maheshwari family and has a fun moment before goddhana.

Abeer misses his mother Meenakshi and brother Kunal as he wants them to be part of his happiness.

While here nothing seems to work and Mishti can see that pain in Abeer's eyes.

Mishti has booked a cab to go to Rajgarh and find truth about Mehul while here Kuhu finds about it.

Kuhu finds about it and here she asks Mishti about it and Abeer is stunned as where is Mishti planning to go before their goddhana ceremony.