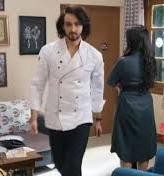 Arya is seeing Neil and Minni’s relationship in different angle and things are going to soon change.

Neil and Minni are completely against each other and leaves no opportunity to fight and do argument.

While Arya will add tadka of love, here Arya will try her cute efforts to get Neil and Minni closer.

Arya will take small and small moments where she try to get Minni closer to Neil and here she takes Nayeem Bi’s help.

Arya’s all these efforts are going to cook bigger syappa of love amid Neil and Minni.

Neil and Minni’s love story will go through major complications and will they be able to win this battle.