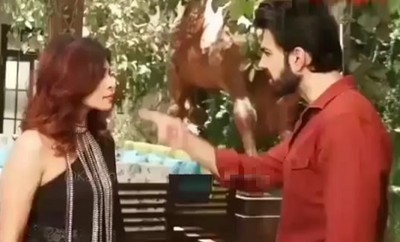 The popular TV show Kahaan Hum Kahaan Tum is seeing lot of twists and turns in the storyline.

Soon after Sonakshi starts getting involved with the Sippys, Sonakshi gets kidnapped.

Rohit feels Nishi is the one who kidnapped Sonakshi, thus he swears to not spare her.

Rohit even grabs Nishi's neck in anger as he warns her about if anything will happen to his Sonakshi then he will kill her dead.

Rohit turns in action to save Sonakshi

The twist in the tale is that Nishi gets confused with Rohit's blame as she herself is unaware of Sonakshi's kidnapping.

Not Nishi but a new enemy has entered in Rohit and Sonakshi's life who has kidnapped Sonakshi and trapped Nishi.

Rohit will be able to save his Sona or it will be late to take action.

Stay tuned with us for more updates and latest news of TV serials.