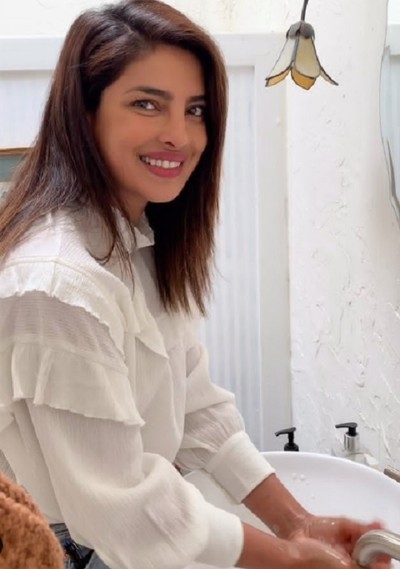 Nominating hubby Nick Jonas and others, Priyanka Chopra is singing a song while washing her hands with hand wash for 20 seconds.

Priyanka Chopra and Nick Jonas are the talk of the town over their lovey-dovey marriage and love relationship.

Priyanka Chopra posted a new video on her instagram account where she is nominating Nick Jonas and others while she is singing ‘Wherever You Are Wash Your Hands’.

Priyanka Chopra has a huge fan following of 51.2 Million where what her safe hands challenge video is breaking the internet.

What caught her fans attention is that when she washes her hands, she doesn’t wastes the water for those 20 seconds but taps off the water.

Stay tuned to entertainment news website Serialgossip.com for latest updates of what is happening around Bollywood in times of India lockdown.

Priyanka's Hollywood entry with The Rock Dwayne Priyanka Chopra the name which need no introduction. Priyanka has been named among the top heroines in Bollywood. Priyanka is a multi talented person, she is ...